What Everyone Must Know About Why study in Australia is the best bet? 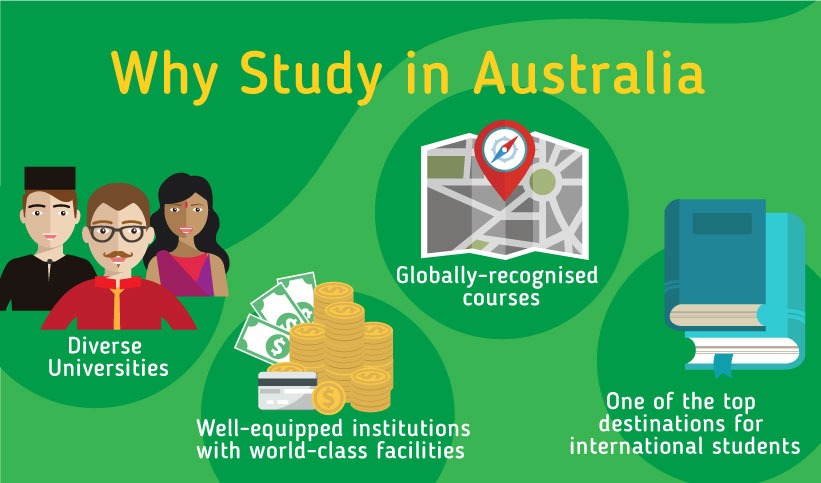 Among 195 countries, there are a number of countries which have their own distinctions and known for tourism and attractions. Australia is one of those countries which stands out exclusively for its multifariousness. The country houses so many attractions which entice tourism and also the students who come from different parts of the world to experience a fine life.

There are a handful of reasons that make Australia an exemplary destination around the globe. Let’s just have a look at few of them-

People may think Australia is not an easy country or it is not so easy to study in Australia. There are several concerns that people have before going to Australia and they feel perplexed. Those who have been striving to be in Australia must know country’s pros.

People often think if they are doing the right thing by going to Australia. If you ever plan to study in an overseas university, then study in Australia can be your absolute option. Don’t just worry and know all the goods to be in Australia.

Things to know before you decide to study in Australia

1) The safest country to live, work and study- Globally renowned for its beauty, Australia is a safe, friendly, multicultural and harmonious country. If we talk about safety, the country has a low crime rate and strict gun control. It has been home to people from over 100 countries, making Australia one of the world’s most culturally diverse countries. Multicultural nature of the country accepts overseas students warmly.

2) Extensive range of quality educational programs- If you are confound about the career choice and don’t have much of options, you better think of going to Australia. The country has an impressive range of study options for overseas students with over 1,200 institutions and 22,000 courses. After

3) The country allows students to work while studying- Study in Australia is purely a golden opportunity as you can earn enough while studying. Working while studying helps complement your study and living experience as well as helping you to pay for living and food expenses. International students are authorized to work up to 40 hours per fortnight during their study duration’s.

4) Great opportunity to blend study with travel- The country is not only famous for education but also for its phenomenal beauty. If you are looking for a fantastic adventure, mesmerizing journeys, amazing nature, relaxing island and beaches, there is nothing like studying and traveling in Australia and explore it.

Australia has been able to attract students from all around the world because of its cosmopolitan environment. The country is also listed in top 10 happiest countries in the world according to the World Happiness Report, 2016.

7) Increased employment opportunities- Seeking a job is easier for Australian graduates in all parts of the world. Australian qualifications are recognized by employers and top-notch educational institutions in many countries.

Standard of learning in Australia

Australian schools are the finest in the world. Following are the reasons which make Australian education valuable:

The land of architectural wonders is now the destination of every student dreaming to study abroad.